The Sage 300 web screens are comprised of 113+ Visual Studio projects. This represents a large and complex code base. Simply opening a project and viewing the components and references to understand the relationships and dependencies can be a daunting task.

The relationships and dependencies between not only projects but also classes and methods are sometimes best understood when presented visually.

Microsoft’s Code Maps, which is a core feature of Visual Studio 2013 Ultimate and Visual Studio 2015/2017 Enterprise Editions, is a fantastic tool to assist with the visualization of these relationships and dependencies.

ReSharper, which all internal Sage 300 developers use, also offers a graphical code mapping feature. However, the features, functionality and even the debugging integration with Code Maps make Visual Studio tool the best tool to use.

This post will introduce the Visual Studio Code Maps and present how developers can leverage this tool to graphically display relationships and dependencies for a project or projects, a class or a method. Code Maps can assist not only new developers, who do not know anything about the code base, but also experienced developers wanting to better understand relationships and dependencies.

Code Maps is an architectural tool in Visual Studio that generates a graph, like a dependency graph, to assist the developer with understanding and viewing the relationships and dependencies of a large code base in a visually appealing, dynamic and interactive graphical display.

A code map visualizes code and project relationships and can even be viewed in a tab next to the code editor inside of Visual Studio. This allows the developer to see where they are in the map and therefore in the hierarchy of the code while in the code itself.

A code map may be saved within the solution or even exported as an image to email or an XPS viewer. While inside Visual Studio, the code map is interactive:

In this example, I want to better understand the A/R Payment Code’s business repository located in the A/R Business Repository project of the A/R solution. I want a visual graph which Visual Studio’s Code Maps feature can generate.

Let’s start by creating a map for the Payment Code Repository. Open the PaymentCodeRepository class and Right-Click on the name in the code window and select the Show on Code Map option: 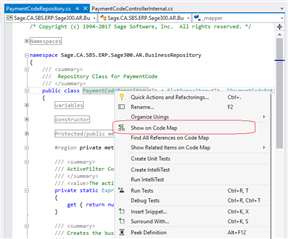 The code map for the class will be generated with a green chevron indicating where in the code the code window is: 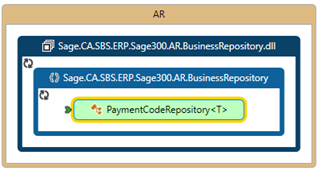 Hover over the code map and select the dropdown chevron to retrieve the components in this class: 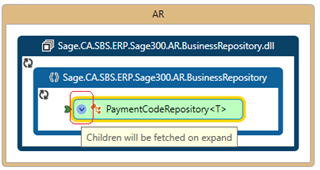 The components (methods, properties, etc.) of the class are retrieved and added to the code map: 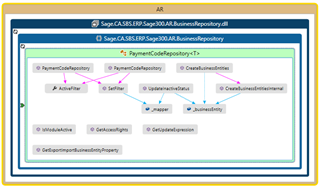 Note that the code map window is side by side with the code window.

Upon showing the methods that are called from this routine, you will notice that they are coming from an external assembly or assemblies: 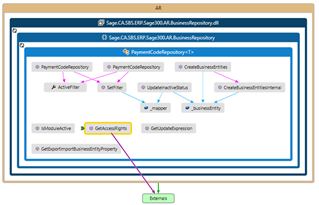 Hover over the External component and select the dropdown chevron to retrieve the components in this class: 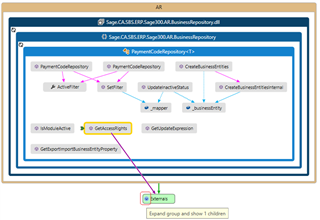 The external assembly is now shown: 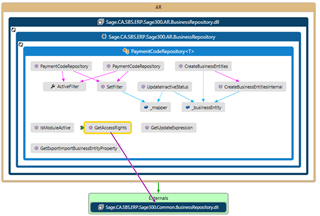 Figure 8: External methods are in the Common BusinessRepository assembly

Hover over the external assembly and select the dropdown chevron to show the methods:

The methods are in a folder within the assembly (namespace): 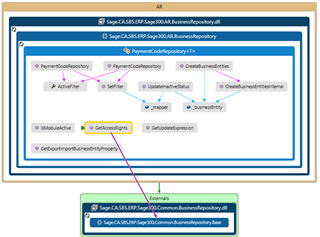 Figure 10: External methods are in the BusinessRepositoryBase namespace

Hover over the external assembly and select the dropdown chevron to show the methods: 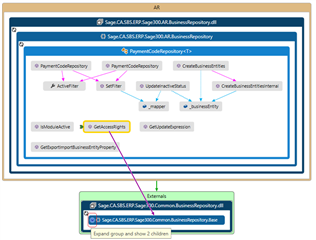 We are getting closer! We can see now that the methods are in two different classes: 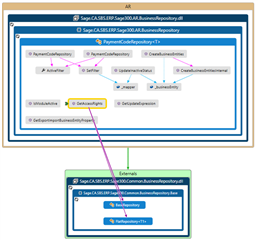 Figure 12: External methods are in the BaseRepository and FlatRepository classes

Hover over the two classes and select the dropdown chevrons to show the methods which results in our final display: 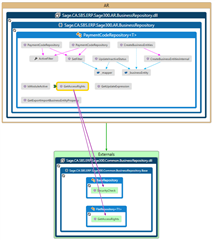 We wanted to see where the GetAccessRights and SecurityCheck methods were located and Code Maps provided a visual graph in just a few steps. 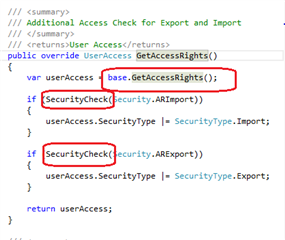 The Code Map Toolbar provides numerous options that can be undertaken on the code map:

The Sage 300 web screens represent a large and complex code base where understanding and viewing the components, relationships and references can be a daunting task.

Microsoft’s Code Maps, which is a core feature of Visual Studio 2013 Ultimate and Visual Studio 2015/2017 Enterprise Editions, is a tool that provides the ability to visualize relationships and dependencies in real time from within the Visual Studio IDE.

Developers can leverage this tool to graphically display relationships and dependencies for a project or projects, a class or method. A simple example was used to provide a graph of a class and its externally referenced method calls.