With all the changes from the Tax Cut and Jobs Act (TCJA) of 2017, the IRS caught up one more piece of housekeeping on February 13, 2019 by issuing Rev. Proc. 2019-13. This is the long-awaited safe harbor rules for taxpayers claiming 100% first-year bonus depreciation on vehicles subject to the luxury car depreciation limits under Sec. 280F(a).  This revenue procedure covers how to calculate depreciation from year two to the end of a vehicle’s recovery life (typically year six) and beyond when 100% bonus is selected for qualifying vehicles with a purchase price of more than the 100% bonus first year limit ($18,000 in 2018).

It also covers when the safe harbor rules don’t apply: 1) if the taxpayer elects Section 179 treatment; 2) if the 100% bonus is not selected, or 3) if the depreciable basis is equal to or less than the first-year luxury car limit ($18,000 if placed in service in 2018).  And by default, through attribution, by tying to other auto depreciation rules, these situations are not covered by the new safe harbor rule: a vehicle converted from a passenger vehicle into a taxi, for example; putting into service a purchased used vehicle that is not new to you (e.g. converted from a lease you held), thus not eligible for the $18,000 100% bonus deduction; vehicles used 50% or less for business purposes; and any vehicle acquired up through 09/27/17 and put into service in 2018 or 2019

Taxpayers that recall the prior 100% bonus safe harbor rules under Rev. Proc. 2011-26 (applicable to vehicles acquired September 9, 2010 to December 31, 2011) will be pleasantly surprised that the new rules accelerate the allowed depreciation in many cases.

The best way to explain the rules is to simplify with assumptions and give examples. We’ll start with these assumptions:

Harry Hundred of Percent Transportation, Inc. bought a $60,000 GT on June 15, 2018. Harry liked his new fast car but seemed to remember that it took a really long time to depreciate the last one.  He called his accountant, Kathleen Kreative (aka KK), “KK, I got the new GT I was talking about. Is it going to take 10 or 15 years to depreciate, like it did back in 2011?”. KK replied, “Harry, I have good news. I just read an article on Sage City that explains the IRS has come out with a new revenue procedure that will allow you to depreciate your car faster than under the old rules. Also, you will be able to take more depreciation in the earlier years, which will lower your taxable income.  When I work out the numbers, I’ll send over a table comparing the new method to the old one.”  This news made Harry happy and restored his faith in the IRS (well, maybe not ALL of his faith). 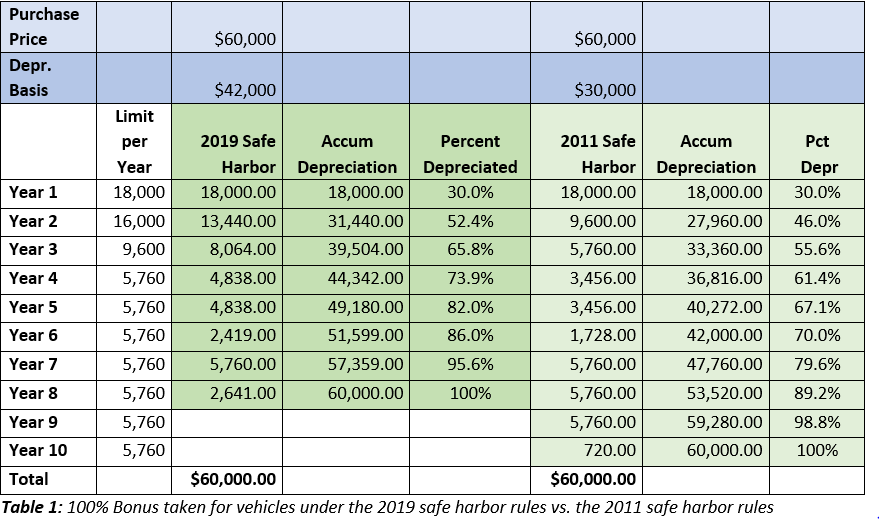 In this example, the GT is fully depreciated two years earlier under the new safe harbor rules and by the end of year 6, the normal depreciable life, it’s 86% depreciated versus 70%. In other words, almost $9,600 more dollars of depreciation expense was available to reduce taxable income using the safe harbor.

Linda Lux of The Luxury Life, LLC bought a LX for $60,000 on June 15, 2018.  In Linda Lux’s circle of influence Section 179 is all the rage, while bonus depreciation is more of an afterthought.  Fortunately, Luxury Life is always in a situation where it can take full advantage of Section 179. The chart below compares the impact of taking full Section 179 vs the 100% Bonus. 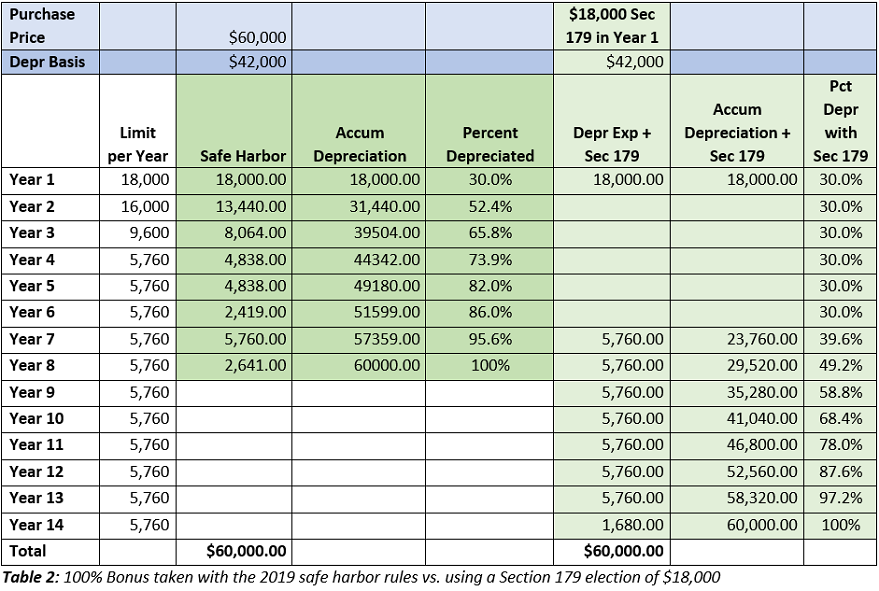 Under the safe harbor rules, using the 100% Bonus still provides a benefit in higher amount of depreciation claimed in the earlier years and in length of total cost basis recovery. One scenario where taking Section 179 may be advantageous is if Luxury Life has positive taxable income in Year 1 but expects large losses in the upcoming years. Perhaps, they will make significant product line changes, incur very high marketing costs, and new infrastructure investments and would rather save the depreciation deductions to go against future earnings when these product initiatives lead to profits again. 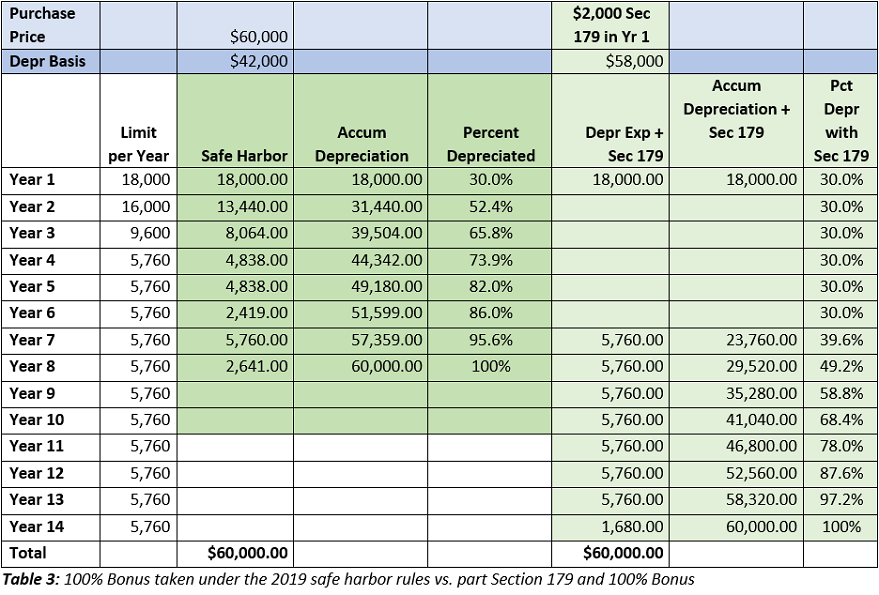 Much like Linda who elected the full $18,000 for Section 179, Willie did not gain any additional benefits by selecting Section 179 and the depreciation period for him is just as long as it was for Linda.  Examples #2 and #3 show that under the safe harbor rules any use of the Section 179 election will result in no additional depreciation expense in years 2 through 6 of the asset’s life. Note: The depreciable basis of $58,000 is calculated as $60,000 - $2,000 Section 179 taken in Year 1.

These examples show that in most cases the safe harbor using the 100% Bonus is the preferred choice in depreciating vehicles. Remember the guidance below to help keep you on track.

To find out more information on how to depreciate your luxury autos, light trucks and vans sign into your Sage City account and see Knowledge Base article KB41446.