“When you have eliminated the impossible, whatever remains, however improbable, must be the truth.”

This blog discusses the basic concept of, and several valuable principles on how to perform a proper troubleshooting exercise to analyse and resolve issues in general, but also focusing on especially Sage Evolution queries that are due to any kind of errors and issues.

By applying the insight gained from this blog you will be empowered to resolve many of your own Sage Evolution queries.

But the end result should take you much further: You can also apply the basic principles discussed below on a wide variety of other applications’ technical and complex queries as well as resolving day to day problems that you may encounter.

Troubleshooting is a form of problem solving, often applied to repair failed products or processes on a machine or a system.

It is a logical, systematic search for the source of a problem in order to solve it, and make the product or process operational again.

Troubleshooting is needed to identify the symptoms. Determining the most likely cause is a process of elimination—eliminating potential causes of a problem. Finally, troubleshooting requires confirmation that the solution restores the product or process to its working state.

Simply stated, the core premise of troubleshooting can be summed up as below:

The power of elimination and logical deduction to ultimately fix a problem!

To elaborate a bit further on the above steps, also consider the following insight:

Usually troubleshooting is applied to something that has suddenly stopped working, since its previously working state forms the expectations about its continued behavior.

The initial focus is often on recent changes to the system or to the environment in which it exists. (For example, a printer that "was working when it was plugged in over there").

COINCIDENCE AND HOW IT SKEWS CORRELATION VS CAUSALITY

There is a well-known principle that correlation does not always imply causality.

For example, the failure of a device shortly after it has been plugged into a different outlet doesn't necessarily mean that the events were related.

This is because the failure could have been a matter of mere coincidence. Therefore, troubleshooting demands critical thinking rather than magical thinking.

APPLYING THE SCIENTIFIC METHOD AS PART OF TROUBLESHOOTING

There is a remarkable overlapping between general troubleshooting principles and the Scientific Method as is clearly illustrated in the image below. 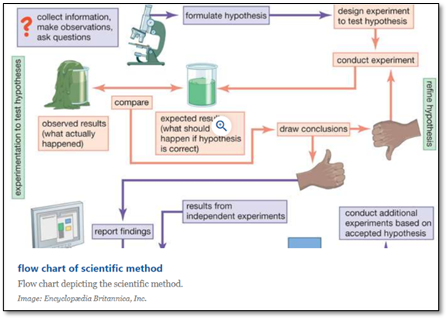 It can never be overstated how important it is to first clearly understand the problem/query/issue (PQI) before even moving on to any other steps in the troubleshooting cycle.

You should therefore form a very detailed understanding of all relevant factors as part of systematically eliminating the possible causes of the PQI.

Especially referring to Sage Evolution, consider the following vital questions to be asked and answered:

There may be even more factors added to the above questionnaire but at least you should get the basic idea here:

As much information as possible is always essential to define the PQI in its fullest sense. Only then should you move on to resolve it.

Now that you have a firm grip on your PQI, the next logical step should be to develop a hypothesis on the true cause of the PQI and how to then resolve it.

According to the Merriam Webster dictionary, a hypothesis can be defined as follows:

1:   a:  an assumption or concession made for the sake of argument

b:  an interpretation of a practical situation or condition taken as the ground for

2:   a tentative assumption made in order to draw out and test its logical        or empirical consequences

3:   the antecedent clause of a conditional statement

The main aim here is to always think logically in defining your hypothesis and then to ultimately resolve the PQI.

PUT ON YOUR DETECTIVE HAT

It should be extremely helpful to start thinking like a detective in your troubleshooting endeavour and ultimately finding the solution.

To add a bit of fun and adventure to your task, simply imagine yourself investigating a scenario that requires the systematic following up of leads.

Of course, you may not always be able to resolve the PQI, but applying the abovementioned advice should at least help you to better understand it and greatly increase your chances of resolving it.

Finally, if you still need additional assistance to resolve your Sage 200 Evolution query, we have a range of handy resources to assist you further.