Sage 300
Sage 300 R&D Insights Sage 300: How to Create a Class in Visual Studio from JSON
Participate in the Sage 300 conversation on Sage City! Click here to join or sign in.

Sage 300: How to Create a Class in Visual Studio from JSON

Some developers may already know how to create a class from JSON metadata. But, for those who do not, this little tip is very handy.

I’ll use the Sage 300 Web API and create classes based upon the ARCustomers endpoint. Of course, this also possible with any JSON metadata, but since this is a Sage 300 blog, using Sage 300 metadata feels right.

I give credit for this tip to Vega and I’m simply providing an illustrated example in this article. Thanks Vega!

The Sage 300 Web API is a great source for JSON metadata since the payloads are JSON. And, since the Web API has implemented the Swagger UI, it is even easier to access the metadata.

The first step is to access the Swagger UI. This is accomplished by navigating to your Sage 300 Web API and accessing the Open Swagger UI button:

After the Swagger UI has loaded the endpoints, scroll down to the ARCustomers endpoint and click on it to expand the available actions:

Click on the first GET action to expand the UI. In the Model Schema section, you will see the metadata for the ARCustomers payload. Copy this entire section:

Now, we have the JSON metadata in our buffer. It is time to move onto Visual Studio to create some C# classes based upon this metadata!

Before we paste the contents of the buffer, delete the 3 lines for the ARCustomers class, which are indicated by the arrow in the image above: 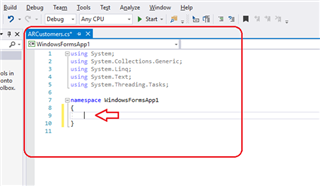 We are now ready to paste our JSON. From the Edit menu, select Paste Special à Paste JSON As Classes: 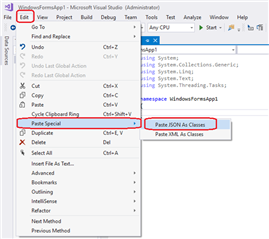 As you can see, we now have C# classes that follow the hierarchy of the JSON metadata. It is very easy to see the hierarchy as well as all the column names: 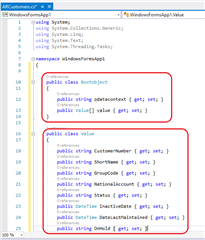 The Paste Special feature names the top class Rootobject and the first or main class is named value. It makes more sense that they are named ARCustomers and ARCustomer respectively: 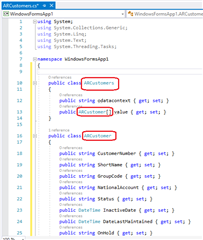 The arrays should be changed to IList especially when dealing with optional fields.

This article explained how to create C# classes in Visual Studio 2017 from JSON metadata that was copied from the Sage 300 Web API ARCustomers endpoint.

Thanks again Vega for the tip!