In my previous article, I shared my thoughts on open sourcing the Sage 300 Web SDK (SDK) and how, in my opinion, this will benefit the Sage 300 Ecosystem.

In this article, I am introducing the SDK as Open Source Software (OSS) and will explain the changes to the original vision since the idea of open source was first presented along with the policies and procedures for the repository.

The original plan was to use the Apache License 2.0 for our OSS. However, in discussions with our Sage Legal Team and the Open Source Initiative team, The MIT License (MIT) was chosen instead. The license can be found here: https://opensource.org/licenses/MIT 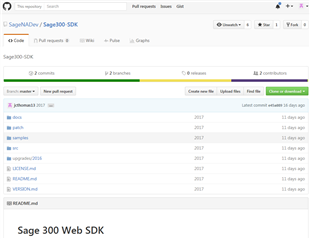 The administration of the repository is performed by Sage’s DevOps Team located in Richmond, BC.

The repository is read-only for anonymous users which means that these users cannot “push” their changes into the branches in the repository.

Collaborators are Sage assigned developers and personnel which have write/push access to the branches in the repository.

There are two main models for collaboration using GitHub:

In the Shared Repository Model, in order to allow everyone to “push” to the repository, users have to be granted collaborator permissions. This is a good solution for small teams where members know and trust each other. This model cannot, or should not, be applied to large teams or a public repository where all users have the right to contribute.

Therefore, with Sage in the collaborator role, the model of choice is the Fork and Pull Model.

There is a difference between a fork for an anonymous user and one for a collaborator. 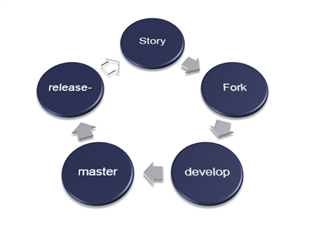 Story branches are where the Sage collaborators make modifications and enhancements to the next version of the SDK. However, on GitHub, the repository is either public or private and branches cannot be private in a public repository.

The branch where the work is performed is not ideally suited for public consumption from an interest perspective, but also from exposing the developer and potentially numerous changes.

Therefore, in order to take advantage of GitHub for both public and private development, a Sage collaborator will:

The Sage collaborators use squashing in order to reduce the commit history being pushed into the public branch.

Therefore, an anonymous user will:

The development branch (develop) is just what the name implies as it contains the in-progress contents of the SDK that is currently being worked on for the next release.

Sage collaborators are pushing changes and potentially merging anonymous requests for the next version of the SDK.

Only Sage collaborators can make changes to this branch.

The current branch (master) is the branch which holds the current release of the SDK.

Only Sage collaborators can make changes to this branch.

This is the branch to be accessed based upon the following question: “Get me the current version of the SDK”.

Only Sage collaborators can make changes to these branches.

The folder structure is identical between the development, current and release branches. The folders are used to segregate the various components of the SDK. The contents are different in that they contain content relevant to the version of the SDK that the branch represents.

This folder holds the documentation for the SDK and contains the following sub-folders:

This folder holds files, if any, regarding any patch work required to the SDK due to late minute changes that were not able to be included in the Sage 300 application. The README file in the patch folder will discuss the patch, the requirements and any steps necessary to apply the patch.

This folder holds the sample projects, which are standalone, runnable versions of different web screens and reports within the Sage 300 application. These samples are to provide implementation knowledge.

This folder holds the source files which comprise the wizards and utilities and contains the following sub-folders:

The SDK follows the release cycle established in the roadmap for the Sage 300 application. Therefore, new versions of the SDK are released when the application is released.

The approval process for changes submitted by anonymous users are performed by Sage collaborators who will review these changes for inclusion based upon the value added to the SDK for the benefit of all users.

Therefore, it is extremely important to provide as much useful information and rational to support the request being made. And, not all requests will be accepted. But, the good news with OSS is that the submitter can still enjoy their version of the SDK even if the request is not accepted.

Depending upon the SDK roadmap, Sage collaborators may be working throughout the development cycle on changes and enhancements and will want to potentially include any requests and issues discovered and presented by anonymous users.

The SDK is released to open source! This article covered the GitHub repository, the license strategy, and policies and procedures pertaining to usage and management of this public repository.

I am excited for the Partner and ISV community to participate and contribute to not only their success, but to the success of the SDK and to other users of the SDK. I look forward to the submissions from the community in modifying and enhancing the SDK.