If you have carried out an upgrade from a version of CRM older than Sage CRM 2017 then this article may be relevant..

The calendar produced by the system action 'responsiveCalendar' is rendered client side with JavaScript libraries using data provided from Sage CRM using its RESTful 'SDATA' API. SDATA requests are directed to the Apache Tomcat side of the system (CRMj webapp). It has been reported by some sites that have upgraded to Sage CRM 2017 R1/R2 directly from Sage CRM 7.2 that the calendar page stopped displaying any appointment or tasks.

We used fiddler (http://www.telerik.com/fiddler) to see what response the client browser was receiving for calendar page requests. Alternatively, we could use HTTP://<>/sdata/crmj/sagecrm2/-/vCalendarCommunication('<>') to see the JSON response for calendar page from the browser.

Below is the response retrieve from fiddler from the site experiencing this problem. 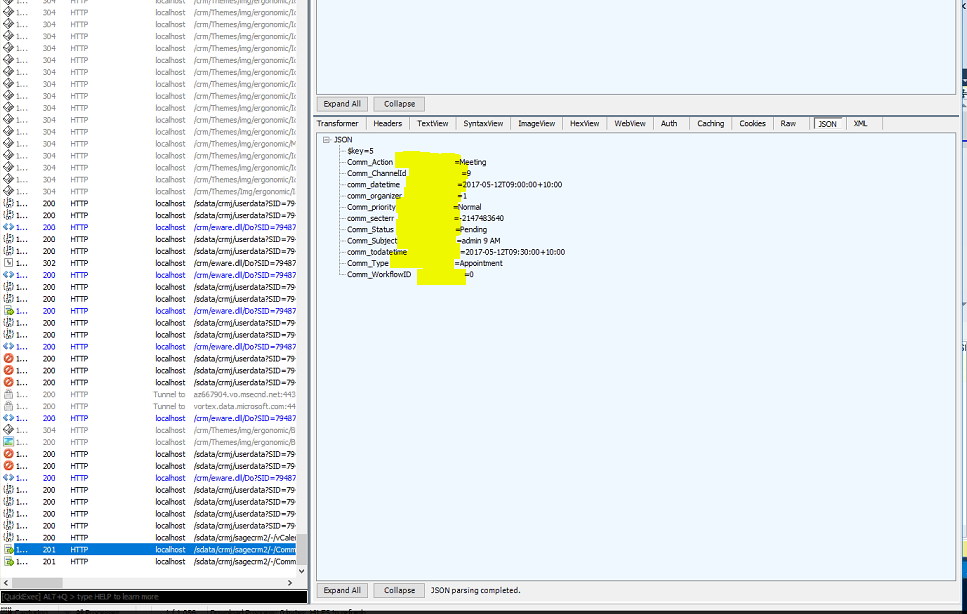 This clearly identifies the cause of the problem i.e. white spaces being appended to the end of column names. We further identified that the SDATA provider was using the colp_colname in the custom_edits tables to construct the JSON response.

We read through the following KB which identifies a similar problem with custom_lists and custom_Screen tables https://community.sagecrm.com/knowledgebase/w/onpremisekba/1088.636-17384-dashboards-not-working-correctly-after-upgrade.aspx.

The solution, in this case, was to make sure Colp_ColName in the custom_edits table was of the correct datatype for Sage CRM 2017 install and data in the column was trimmed of white spaces.

The following process was used to resolve this problem

Note: - Please take necessary backups before running any scripts on DB and make sure there are no users in the system.

Note: - Please take necessary backups after running any scripts on DB and make sure there are no users in the system.

Below is the response retrieve from fiddler from the site after making these changes.

After following all the above steps the calendar page was functioning correctly again.